Tooth-filing and weddings in Bali

You’ll probably see at least one ceremony during your holiday in Bali. You will also see Balinese people doing their rituals every day and if you’re lucky, you’ll be invited to a real Balinese household to experience the ceremony yourself. Balinese recognize five types of ceremonies (panca yadnya). The first category are religious rituals dedicated only to Gods (dewa yadnya). These take places during all of the celebrations, annual house or temple ceremonies (odalan) or on holidays Galungan and Kuningan. Second category (pitra yadnya) includes all the rituals and ceremonies for worshipping the spirits and souls of the ancestors.

These are usually ceremonies related to death and are organized after someone passes away. To the category of rsi yadnya rituals belong all the rituals specialized for spiritual cleaning of the Hindu priests and to this category also belongs ceremony for obtaining a priest title. Manusa yadnya are ceremonies connected to the life-cycle of Balinese people. The fifth is Bhuta yadnya, which consist of all the rituals for worshipping and pushing away the negative spirits and energies. Balinese believe, that to maintain the balance, both sides need to be satisfied equally, that’s why are bhuta yadnya carried out at the same time with the rituals for the Gods (dewa yadnya). During the religious rituals, the negative energies and spirits are worshipped the same way as Gods. 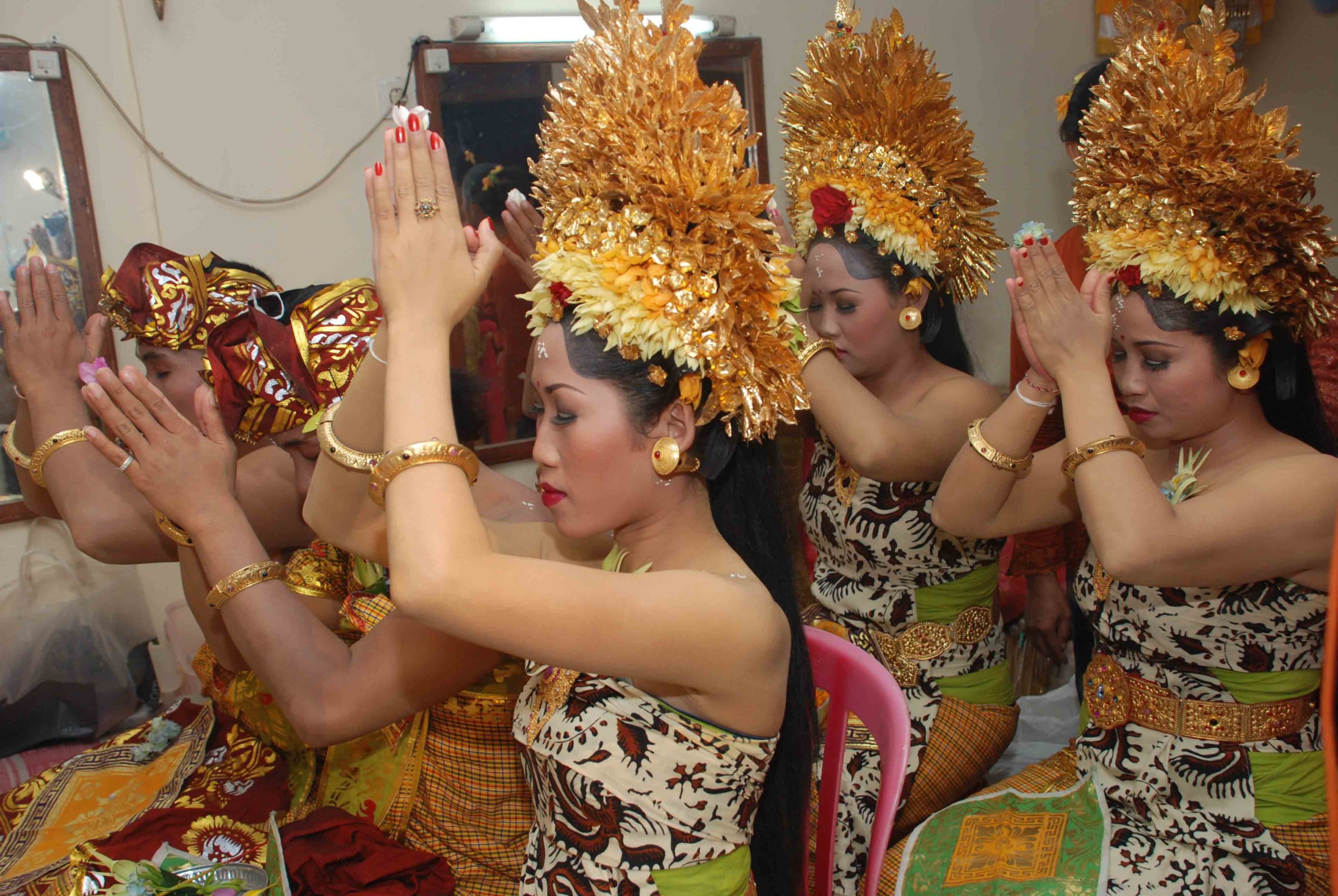 As was already mentioned in our previous article about Balinese culture and traditions, in Bali, every important even in human life is followed by a particular ceremony (manusa yadnya). As an important event in human life is considered for example event as birth, puberty, maturity, marriage or death. Balinese Hindu celebrate important holidays, according to the Balinese saka or pawukon (210 days) calendar, the most important Bali holidays include Nyepi (day of silence), Galungan and Kuningan, Siwa Ratri, Pagerwesi or Saraswati day. Saka calendar is based on the phases of the moon and unlike the ceremonial pawukon calendar, has length similar to the Gregorian year. Each month begins the day after a new moon and has 15 days of waxing moon until the full moon (Purnama), then 15 days of waning, ending on the new moon (Tilem). The first day of the year is usually the day after the first new moon in March. This makes the days with full moon and new moon also very important, therefore there are ceremonies held on these days as well. The important ceremonies sometimes consist of various rituals, especially the ones connected to the events in human life. The rituals may also differ according to the village or area tradition.

For the tourist, the most interesting and fascinating of these ceremonies would probably be the tooth filing ceremony (mesangih or mepandes). The reason for tooth filing ceremony is to control human characteristics, which are considered as evil: greed, lust, anger, confusion, stupidity, jealousy, ill-will, and intoxication by either passion or drunkenness. It is an important life event ceremony and it’s held when reaching the puberty, if not then, must be done before marriage, because by this ceremony Balinese officially become adult. It is the most important ceremony for adolescence and it’s not unusual, that this ceremony is delayed or mass organized; more families from same village participate and share the costs. 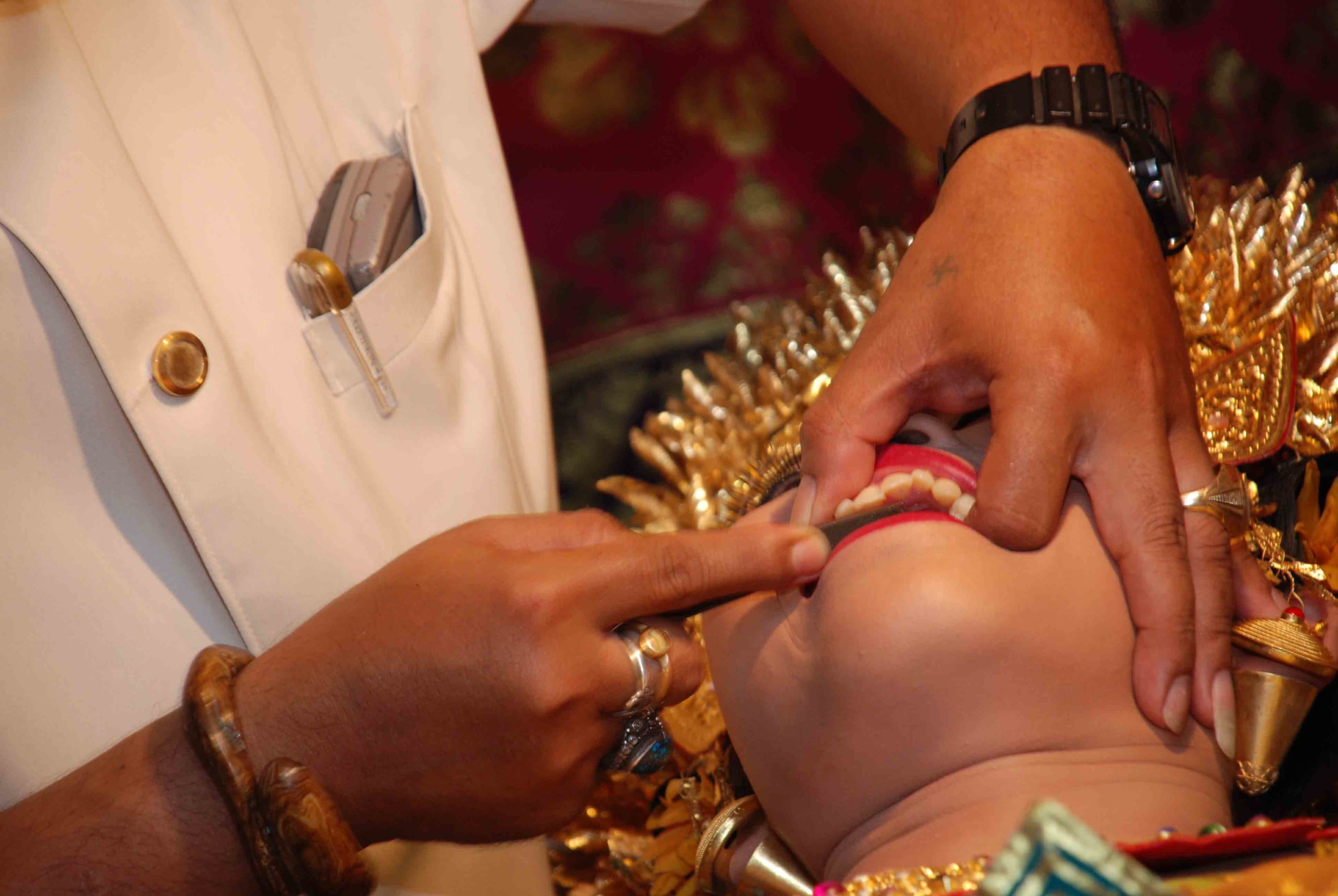 Fangs or sharp teeth are characteristic for the animals and wild creatures, Balinese believe that without the teeth being filed, person may be denied to enter the heaven after death, because might be mistaken with a wild creature. During the tooth filing ceremony, person is very vulnerable, so there’s often the family members holding and surrounding the one going through this act. There’s good and evil in every person and this ceremony is about to help balance them. If you’re invited to the tooth filing ceremony as a foreigner, it is considered as a high honor, only close family and friends are usually present. It is mainly because foreigner might be one of the evil spirits attacking during these vulnerable moments.

Marriage is another event in life, which is definitely considered as one of the most important. The marriage system in Bali was very strict in the past. People were allowed to marry only partners from the same caste, without any consideration about their feelings. They believed that love is something that will come to the marriage naturally, after some time. Times have changed and love is the most important thing when choosing the partner to marry nowadays. Except love, the reason for marriage is many times girl being pregnant, because babies born to unmarried couple are considered as a kids without family.

Preparations and celebrations of marriage in Bali last for couple of days and consist of few rituals which may differ according to the village traditions. When a boy decides to marry a girl, he has to go to her house to ask her and her parents for the approval. The potential groom, his parents and other family members come to the house of the girl’s parents and respectfully ask for their daughter, which also includes offerings and ceremony (memadik). The parents of bride-to-be have to approve the wedding. If the answer is yes, the bride will go with the groom to his family’s house. After few days, the wedding ceremony (pawiwahan) is held, with both of the families, friends and village members. Wedding might last more days, some couples have the religious ceremony on one day and the reception the other, so they can fully enjoy it and invite all the friends and people that were not invited to the ceremony. 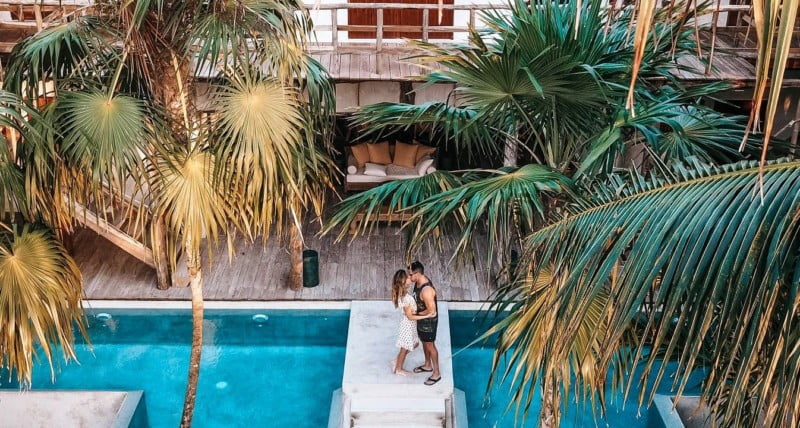 Scuba Diving on Your Bali Honeymoon

END_OF_DOCUMENT_TOKEN_TO_BE_REPLACED

Why You Should Continue Your Scuba Diving Education

END_OF_DOCUMENT_TOKEN_TO_BE_REPLACED 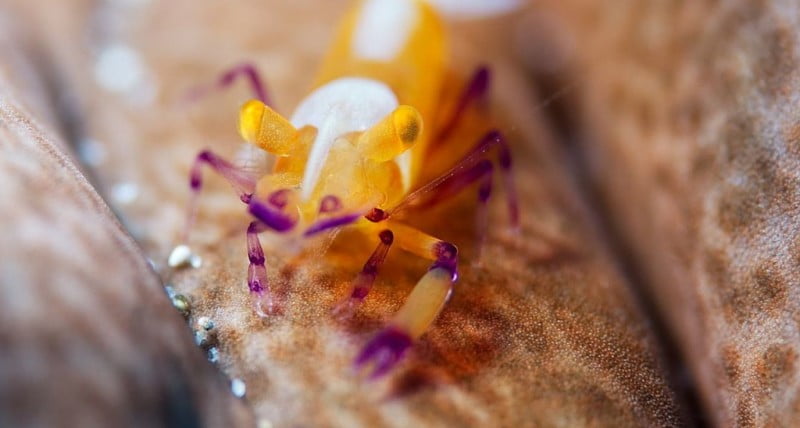